This “life-size” My Little Pony stands at 49″, or just over 4 feet tall. It is made from a strange plastic compound that weighs close to 250lbs including its base.

It depicts a Sweetheart Sister Pony which looks very similar to Spring Song, with added embellishments to her mane and tail, and a headdress of flowers. Through the body of the pony is a spiraling wooden post, used in its original purpose as a carousel post.

This pony, as well as its two fellow handmade one-of-a-kind yellow and pink counterparts, was used in a 1986 commercial for My Little Pony. In this commercial, three girls sit upon these giant ponies on a spinning carousel in the commercial’s opening.

After production, the ponies were stored in a warehouse and untouched for about 20 years. In 2007, during a cleaning out of that warehouse in Orlando, FL, these ponies were discovered and put up for sale. Each had to be shipped through freight. I purchased the purple one because it happens to be my favorite color.

This is the only one of the original 3 ponies to be both intact and to have a known location.

This item is NOT for sale. 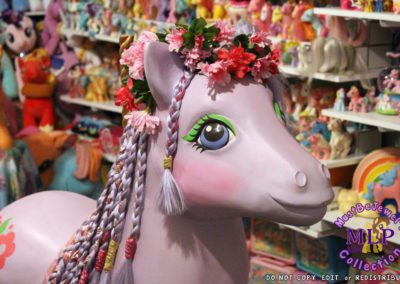 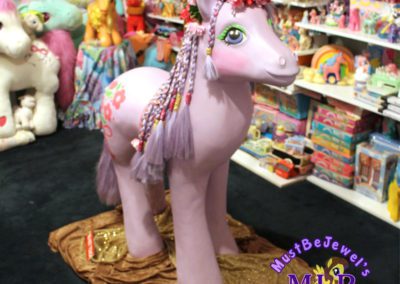 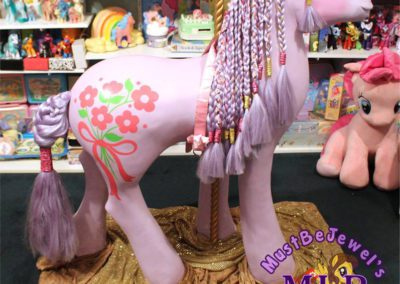 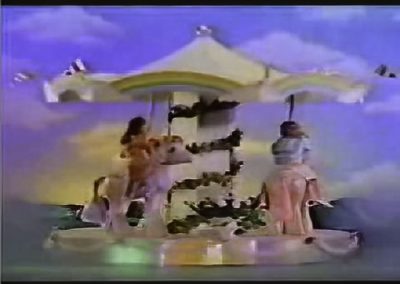